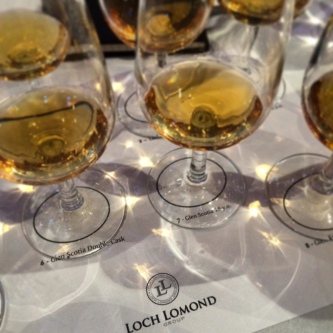 A little known distillery to me, although I pass within a gnat’s whisker of it each time I go to Islay. The Loch Lomond Group covers Inchmurrin, Glen Scotia and of course, Loch Lomond.

Micheal Henry, Master Blender, took us through 8 drams on the evening with the usual, well natured crowd of The Wright Wine Co.

First up was Loch Lomond. Classes as a Highland malt, although a stone’s throw from Glasgow at the foot of the Loch itself, just into the Trossacs.

The first Loch Lomond Distillery was first established in Arrochar in 1814, but was closed within years. The present business was established in 1964 by former owners of the Littlemill Distillery. In 1984 the distillery stopped production and then resumed malt production under new ownership in 1987.

Grain whisky production began in 1993 with two new malt stills were added in 1999. At the time the Grain distillery opened in 1994, it was the only distillery in Scotland producing both Grain and Malt whisky.

The whiskies on offer were;

Loch Lomond Single Grain
A very young spirit bottled at 46% abv. The malt is subject to high temperatures which changes the way the proteins react, we’re told, and spirit is taken off at 83%.

Although it had an initial ‘new make’ sulphur nose, this soon went to reveal a pleasant dram.

Loch Lomond Original
This has aged spirit from 5 to 18 years, but overall would average 8. So again, quite young.
It’s a subtle and easy dram to drink, with a slight smokiness to it giving a nod to it’s nearby Island neighbours.

Loch Lomond 18yo
This got two ticks in my notes, so must have struck a chord.
First fill bourbon and i have some illegible notes mentioning a hogshead too. Perhaps finished in one?

This is a single malt and again, has a subtle waft of smoke which is preceded by a more rich and creamy dram.

The finish was looong! Lovely stuff.

Next up, Inchmurrin.
Inchmurrin I suppose is a brand of Loch Lomond. Such is the versatility of the Loch Lomond distillery, they can create a broad array of whisky. More on that later.

The name Inchmurrin comes from one of the Loch’s Islands.

Inchmurrin 12 yo
This was beguiling at first. Absolutely nothing on the nose for me and another taster on our table.
However, don’t be dismayed. It tastes great.
Incredibly smooth, fairly light and again, a hint of smoke.
The finish was great too.

Inchmurrin Madeira Cask
Another with two ticks.
This is 9-15 yo spirit with a lovely fig nose.
Not as smooth as the 12 but the flavours of fruit, and nuttiness are great.
This is aged in ex-bourbon casks before being finished in Maderia casks which just seems to amplify and extend the richness you’d expect.
Great dram.

It was great to have a Campbeltown whisky on the list, so i was really looking forward to this.
Old Scotia, as it can be known, has been operating since 1832. Campbeltown, at it’s peak, was known as the whisky capital of the world with 21 distilleries in the ‘wee toon’. Alas, only three remain; Glen Scotia, Springbank and Glengyle.

Glen Scotia Double Cask (46% abv)
My notes simple read; lovely, bourbon, sherry.
To elaborate, it starts life in a first fill bourbon before being transferred to a PX cask. As such, you get a spicy drink with vanilla coming from the bourbon too. It’s well balanced and quite powerful too – with an oily feel to the mouth and a ‘spirit’ flavour not so unlike brandy perhaps.
For a £35 bottle, this is a great start. An award winning whisky, and i can see why.

Glen Scotia 15 yo (46% abv)
This has a harsher finish – perhaps the age statement? It’s certainly on a par with Double Cask, but i did find double cask an easier drink.

The 15 is a very rich drink with lots of fruit coming out, and a coastal element too. Is this what defines Campbeltown? Ginger is present too – adding a varied flavour profile.

Glen Scotia Victoriana (51.5% abv)
The final dram of the night, and most expensive of the lot. Have we peaked too soon with Double Cask, or do all roads lead here?

Immediately you pick up on the heated nature of this, and the strength too. It’s finished in specially selected, heavily charred casks which gives most elements of this a ‘dark’ note – oaky nose, rich dark berries on the palate, more fruit and dark chocolate finish.

Was it good? Yes.

Was it the winner..? For me, that acidulate goes to Glen Scotia Double Cask. That’s where my money went.

You should look into this – or perhaps i will do some notes just on this. LL group has some very traditional whiskies – Glen Scotia for example, but there’s some very modern thinking and crafting going on. The array of stills allows them to be very versatile as they go from Loch Lomond pot stills, through to the Loch Lomond/Inchmurrin stills (think a pot still with a continuous still on top), the then two types of continuous still..